Zion National Park is my favorite National Park.  It’s beautiful, it’s small, it has amazing hikes and there’s a free shuttle!  All pluses in my book.  Every time I come back I always stay longer than I did the time before.  I always have a good time! But if you’re short on time, don’t worry I got you covered. 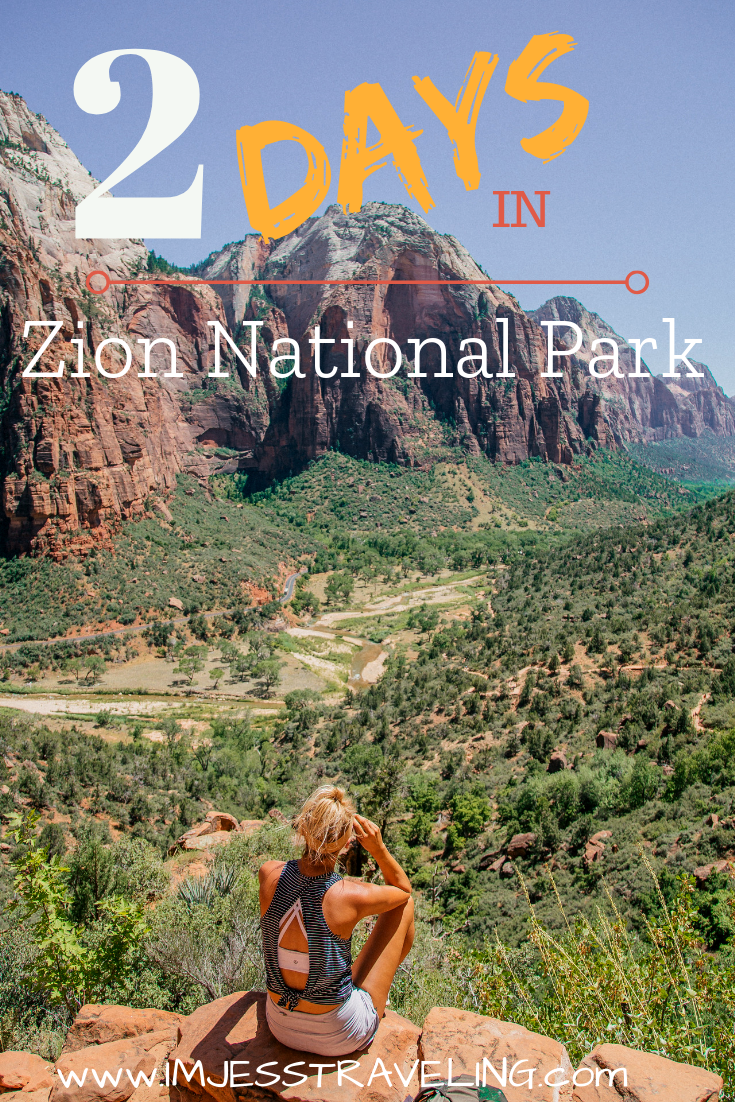 *I have sprinkled some affiliate links in this post that gives me commission at no extra cost to you if you decided to make a purchase. All proceeds go to keep Jess traveling. I only recommend products and places that I believe in.  I thank you in advance.

First, are you a camper or do you prefer to stay in a hotel?  I usually camp when exploring National Parks because it keeps the costs down and I’m able to adventure more often. Don’t get me wrong, a nice hotel with a hot shower and A/C after a long day of hiking in the heat sounds phenomenal, I just can’t always roll like that.

We camped at Zion Canyon Campground.  It was located right off stop 3  on the Springdale line.  It was pricey at $45 a night for campground standards but had showers, grills, WiFi in some areas.  Book a tent site down by the river, we were bummed that we didn’t.

If you want to camp inside the park, book in advance at Watchman Campground.

If you want to stay inside the National Park but not camp then check out Zion Lodge.   It’s the only place that offers accommodations and food inside the park.

Springdale is the closest town to Zion.  It’s at most a 10 minute shuttle ride to the enterance of Zion depending on where you stay.  Flanigan`s Inn has amazing views, an outdoor pool, and good cheap breakfast.  Prices start at $239 a night.

Zion is Utah’s first National Park and one of the smallest with a surface area of 229 square miles.  If you have a National Park pass, it gains you entry. I t costs $80 for a yearly Park pass which pays for itself after 3 visits to any national park in the United States, including Hawaii!  If you don’t have a National Park it costs $35 per vehicle and is good up to week of entry.
You can’t drive all the way through the park with your vehicle but there is a free shuttle that runs frequently, every 5 minutes or so that takes you through the park. The shuttle through Zion is also free and easy.  I love the ease and jumping on and off a free shuttle, it makes traveling and exploring much more enjoyable. 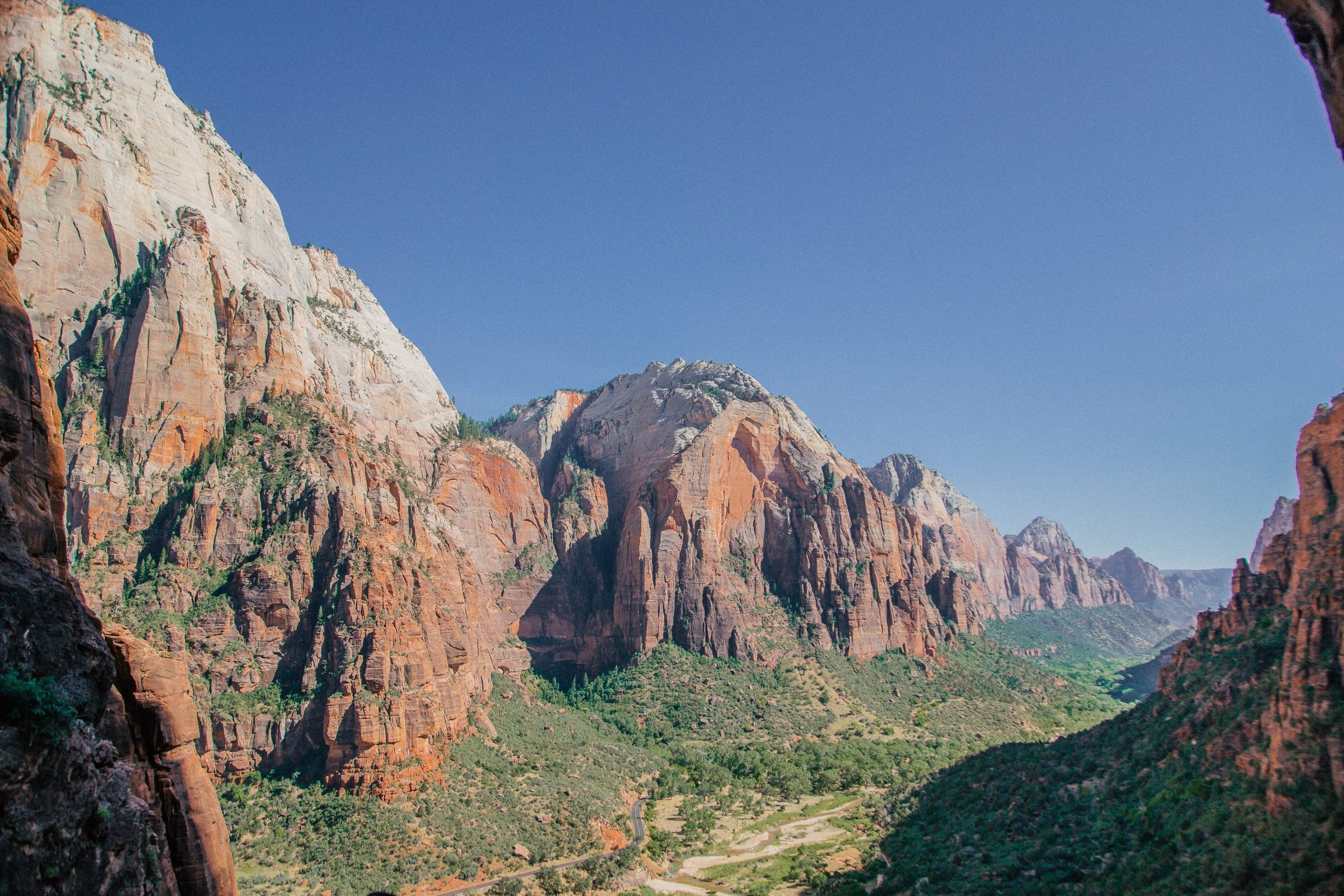 Explore Zion by hopping on the shuttle, taking in the views and get off at stop 8 Big Bend.  Stop 8, Big Bend has no hiking trails, so it often gets over looked but it’s a great place to hop off and get some photos. You can soak in the shear size of these massive sandstone cliffs before getting back on the shuttle going the south toward the entrance.

Next, stop 7 Weeping Rock.  About a half a mile in you’ll come to a large rock that has water seeping from the middle of the rock. This happens when water soaking through the ground seeps through the layers of sandstone until it hits one layer that it can’t penetrate, thus exiting where it can creating the illusion of Weeping rock.

This is also where Observation Point Trail begins which gives you views over looking Angels Landing.  It’s a strenuous hike that takes up to 6 hours to complete.  Having only 2 days in Zion means you have to decide between hiking Angels landing or Observation Point because they’re both difficult, takes time and you’ll be exhausted after completing one in the summer heat. 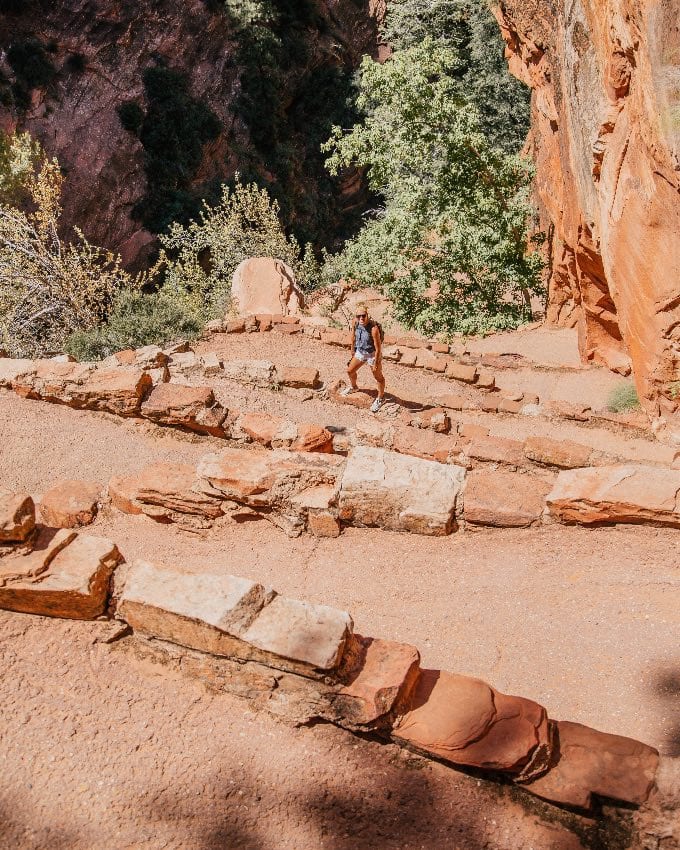 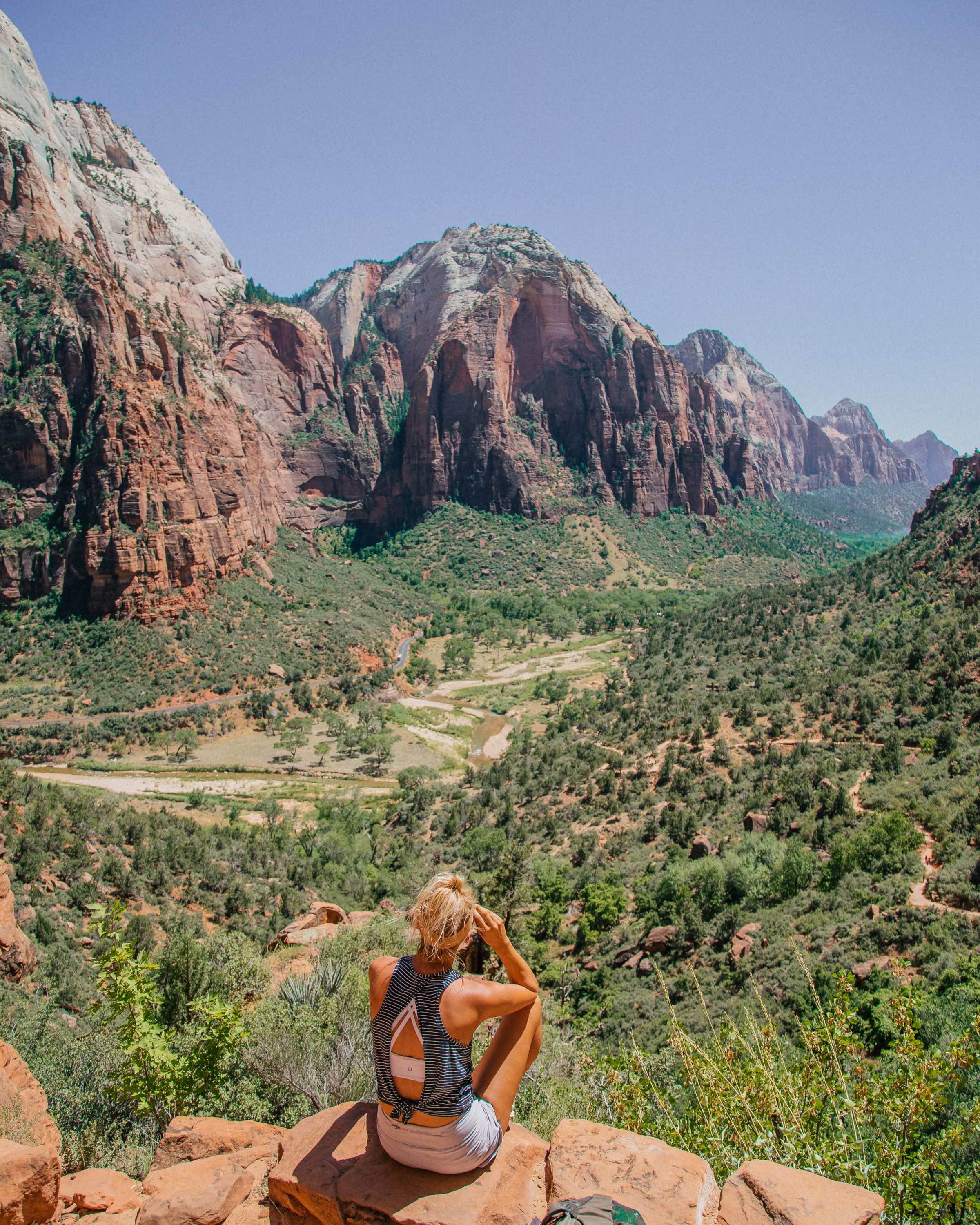 Unfortunately Observation Point Trail was closed when I was here last due to a land slide.  On the bright side, this made the decision on which one to hike very easy.

If Observation Point Trail is closed or you chose to hike Angel’s Landing, your next stop will be #6.  The infamous Angel’s Landing hike is a personal favorite.

This is a strenuous, thrill seeking hike. It’s a 5.4 mile round trip hike and the last half mile of the hike is set on a narrow ridge with chains bolted into the mountain to assist your climb up and down as you traverse the ridge with steep drop offs on either side.

The chain section comes after a grueling 1.8 miles up the mountain through a series of switchbacks.

Trust me the hike is worth it, the panoramic views and adrenalin running through your veins will make you feel on top of a mountain, literally. 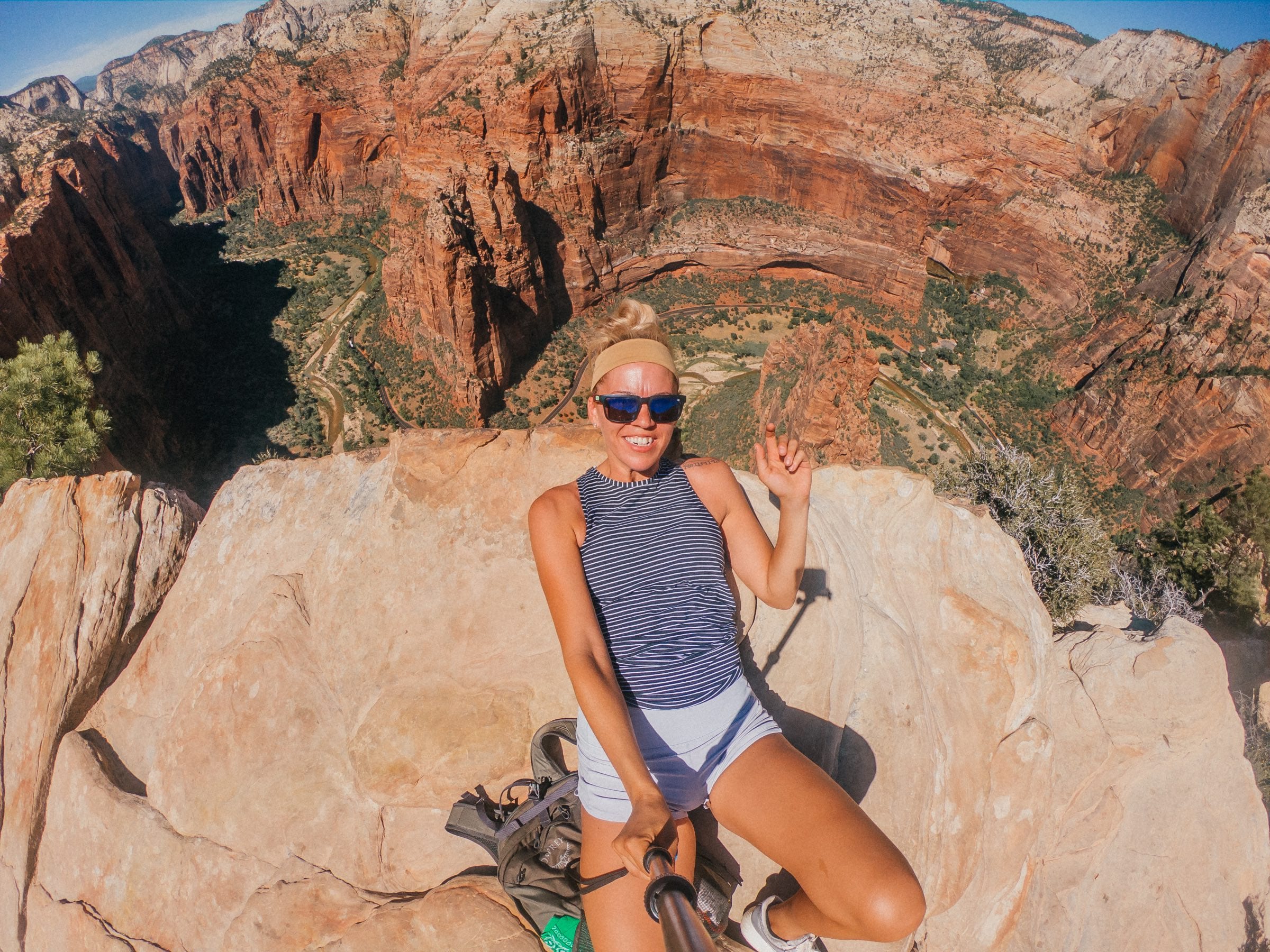 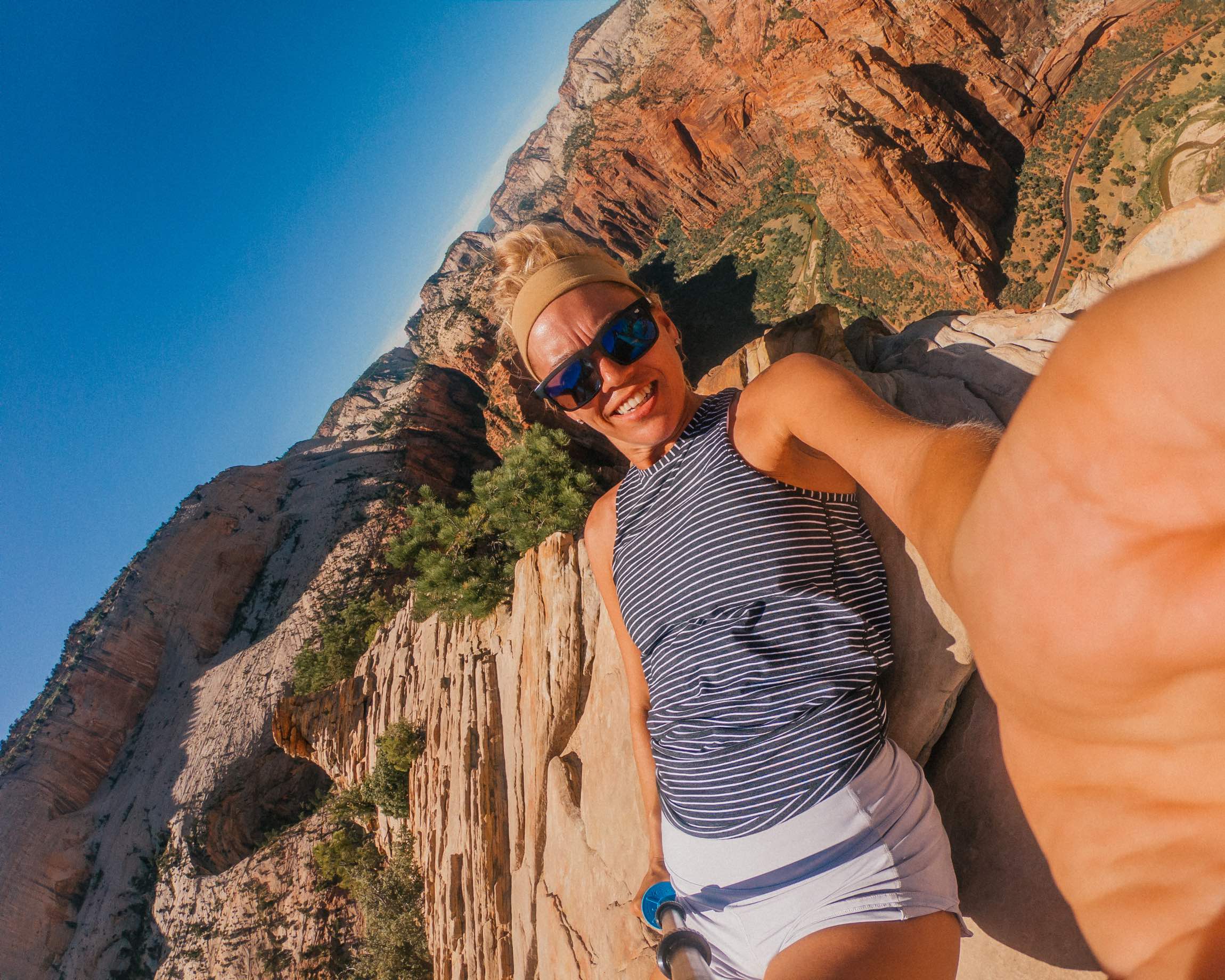 Check out the views, and they’re must better in person!

Make sure you fill up on snacks and water before you tackle this challenging hike. There’s a water fill station at most of the shuttle stops, this one included so fill your water bottles before making the climb.

Hiking early morning or later in the afternoon aids you in avoiding crowds, which is especially important as your climbing up the mountain with the help of chains.

This past visit we started our hike around 2:45 pm and there was virtually no one on the mountain with us! It was AMAZING!

In the morning jump in the car drive the scenic road to the east entrance.  There’ll be plenty of places to pull to the side of the road and take pictures and crawl up on the sandstone. 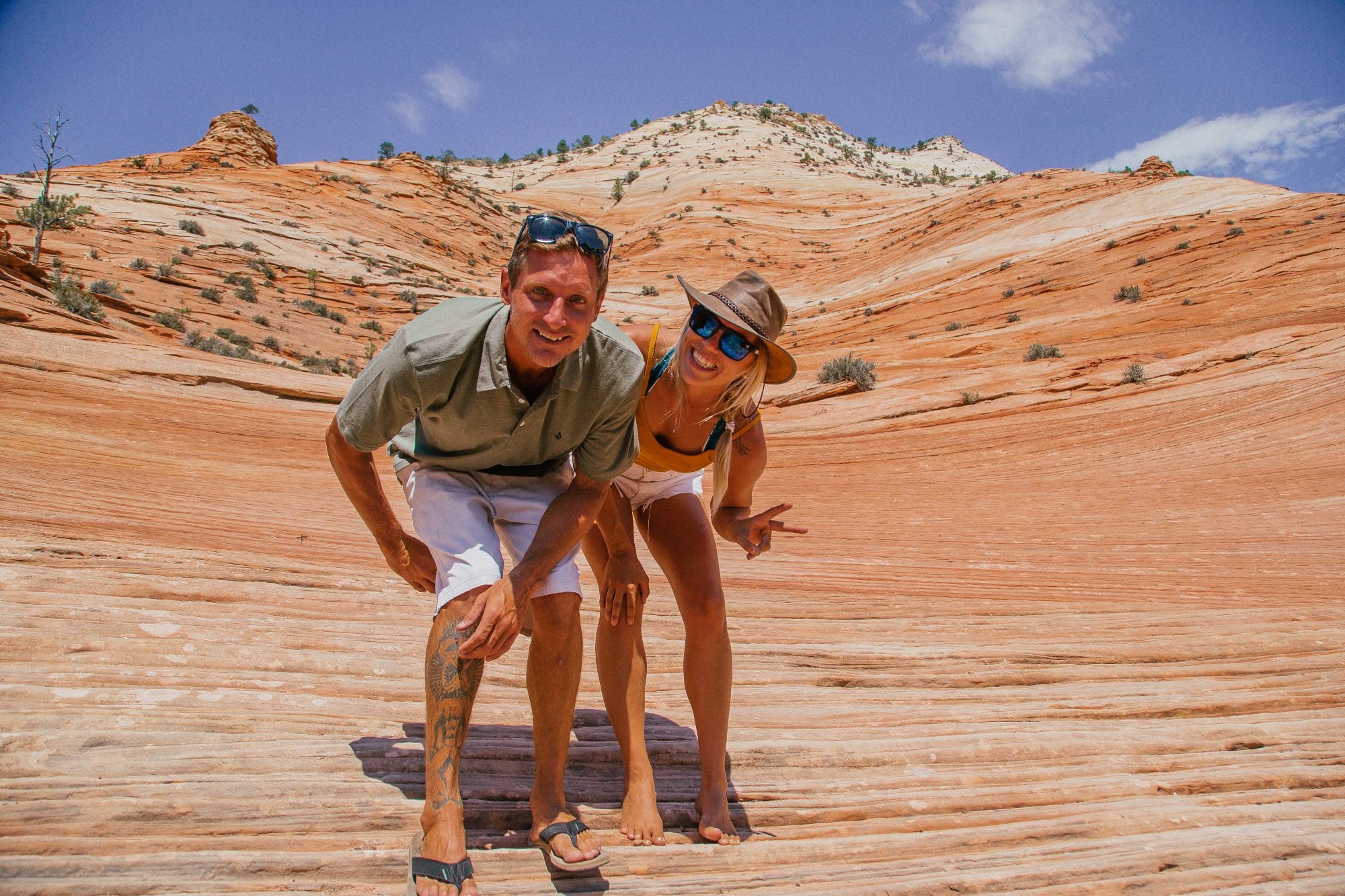 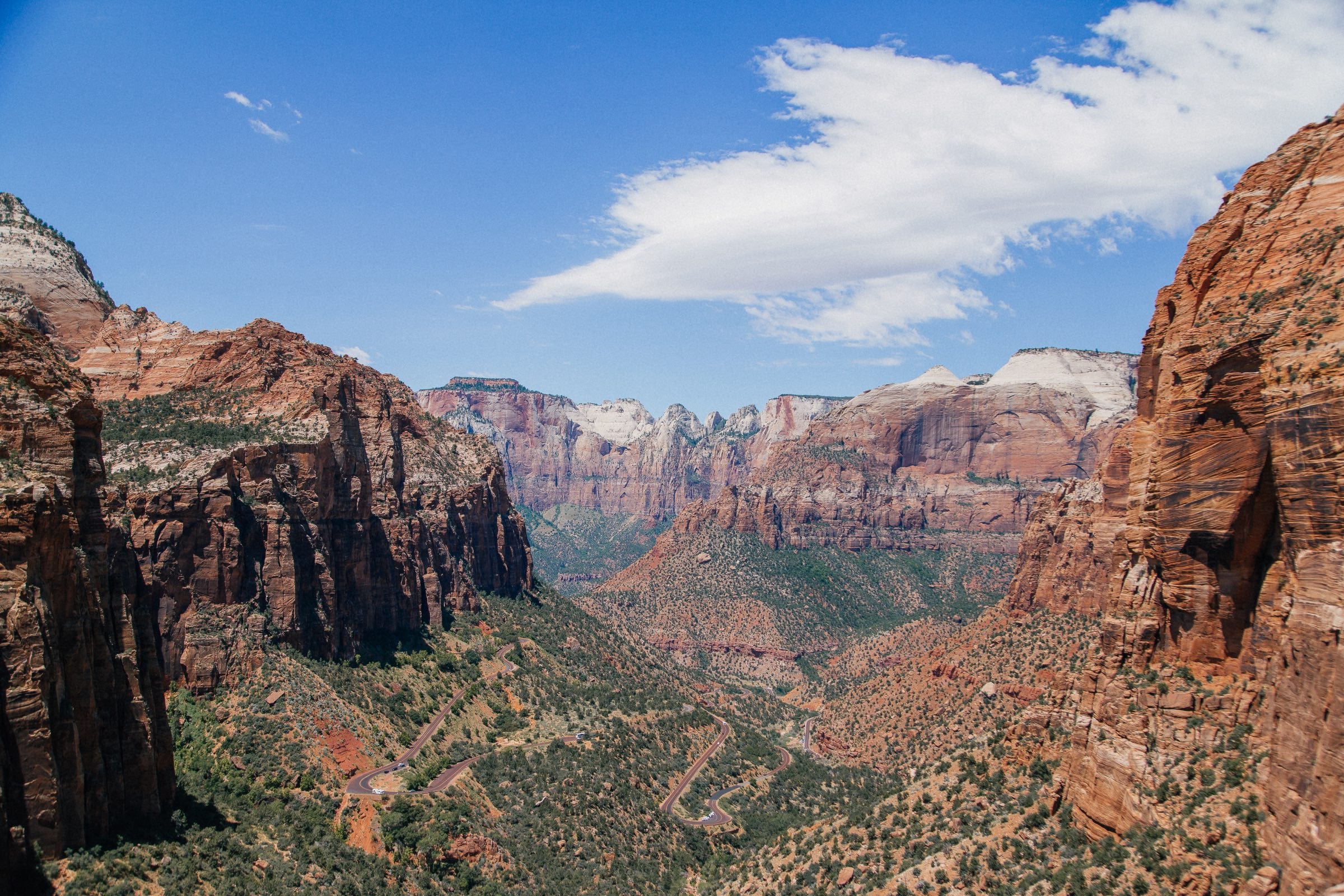 If you plan on spending a few nights in Bryce Canyon or will be in the area longer than 2 days, this is a great hike to do as you exit the park and you could fill your morning on another hike.
In the afternoon, take the shuttle get off at Temple of Sinawava stop 9. You’re about to hike the Narrows!  The Temple of Sinawava or “river walk” is beautifully paved.  The path will end when the only way to continue forward is to get wet in the Virgin River which is where the Narrows hike begins. 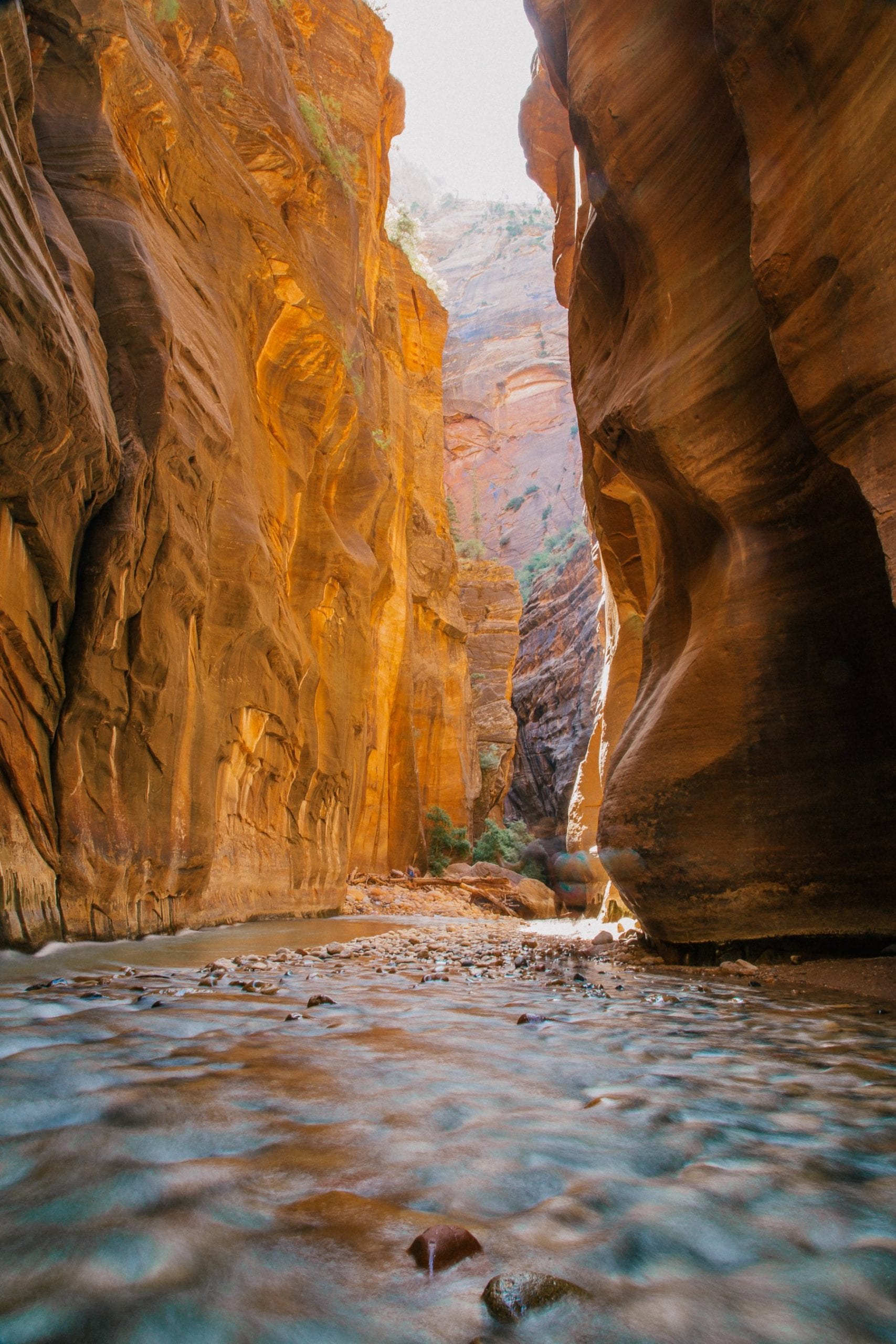 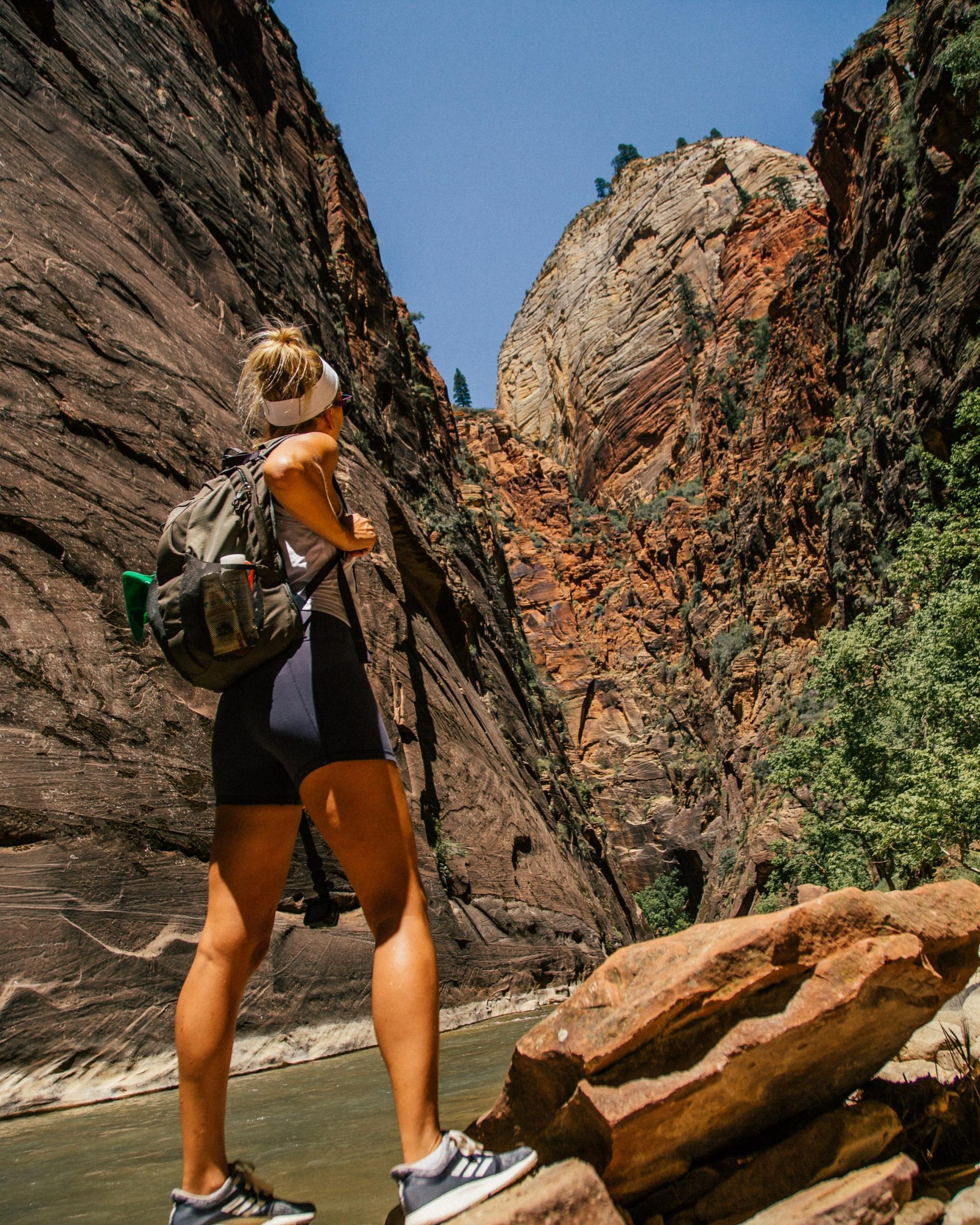 When most people think of Zion, the Narrows hike comes to mind.  This hike takes you along the Virgin River bed where you’ll be scurrying over rocks and tree trunks. You’ll be wading through the river most of the hike up to waist deep in some areas. The Narrows is Zion’s most popular hike so be prepared for massive crowds.  The farther you venture down the canyon the less people there will be. 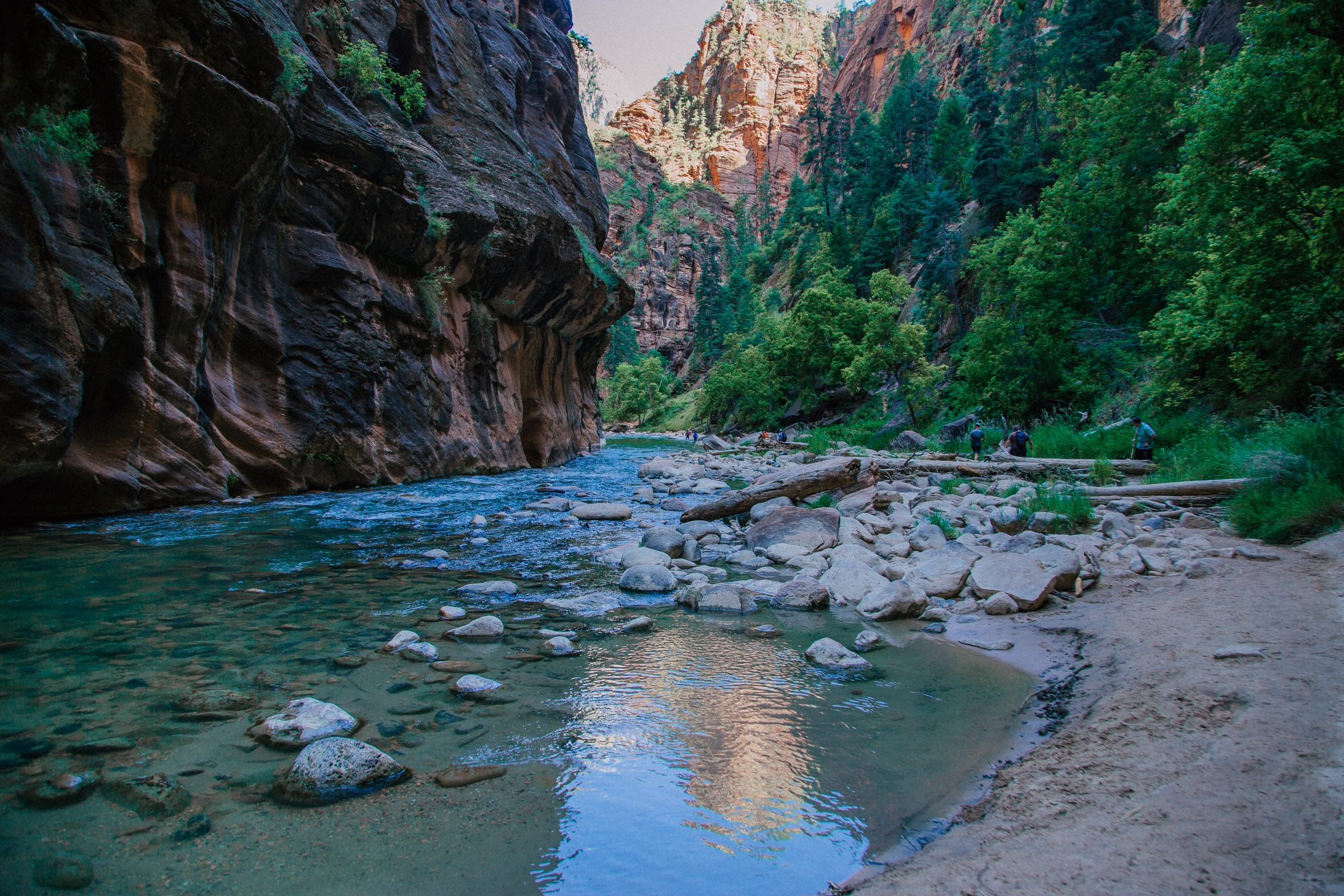 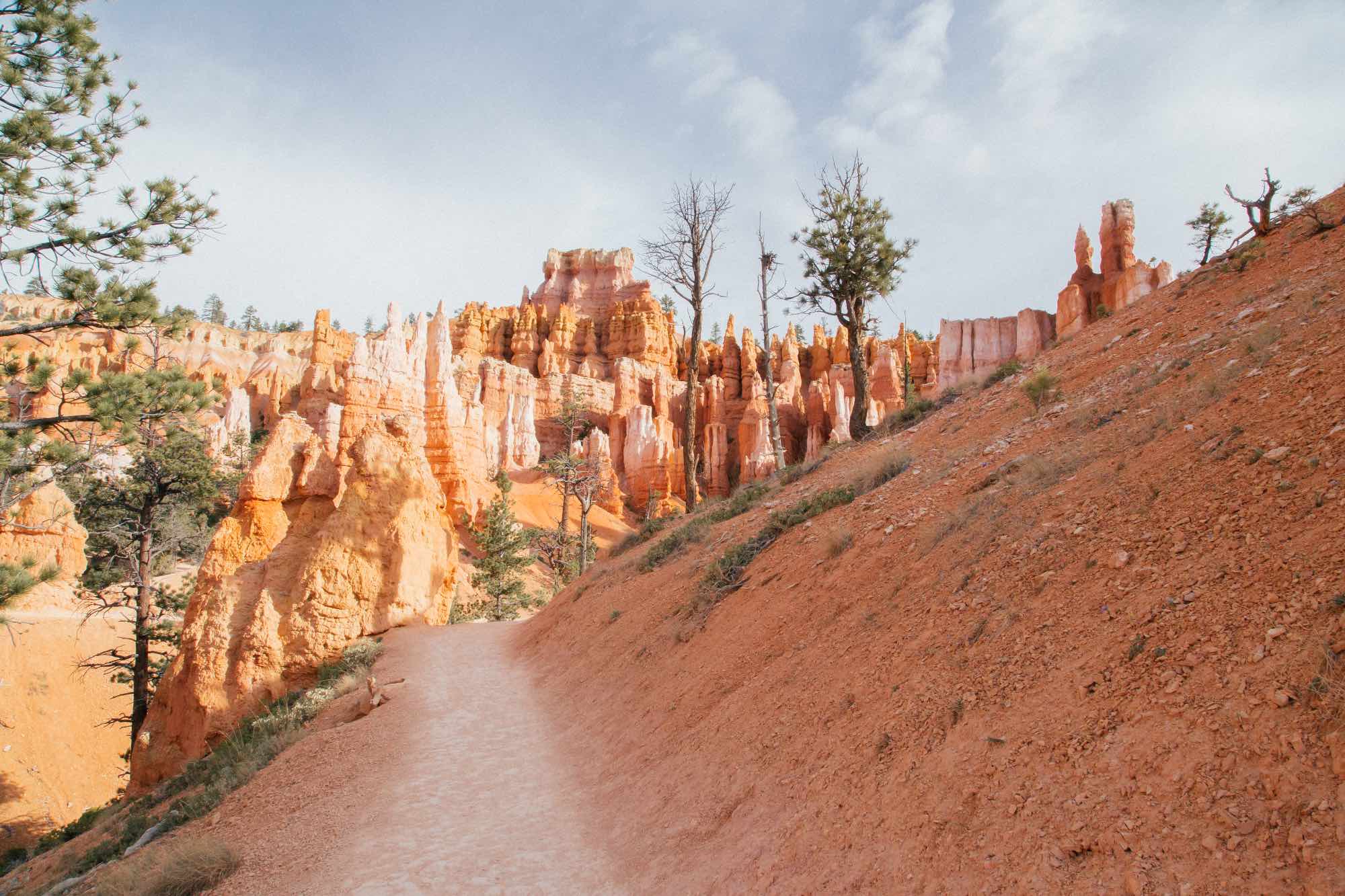 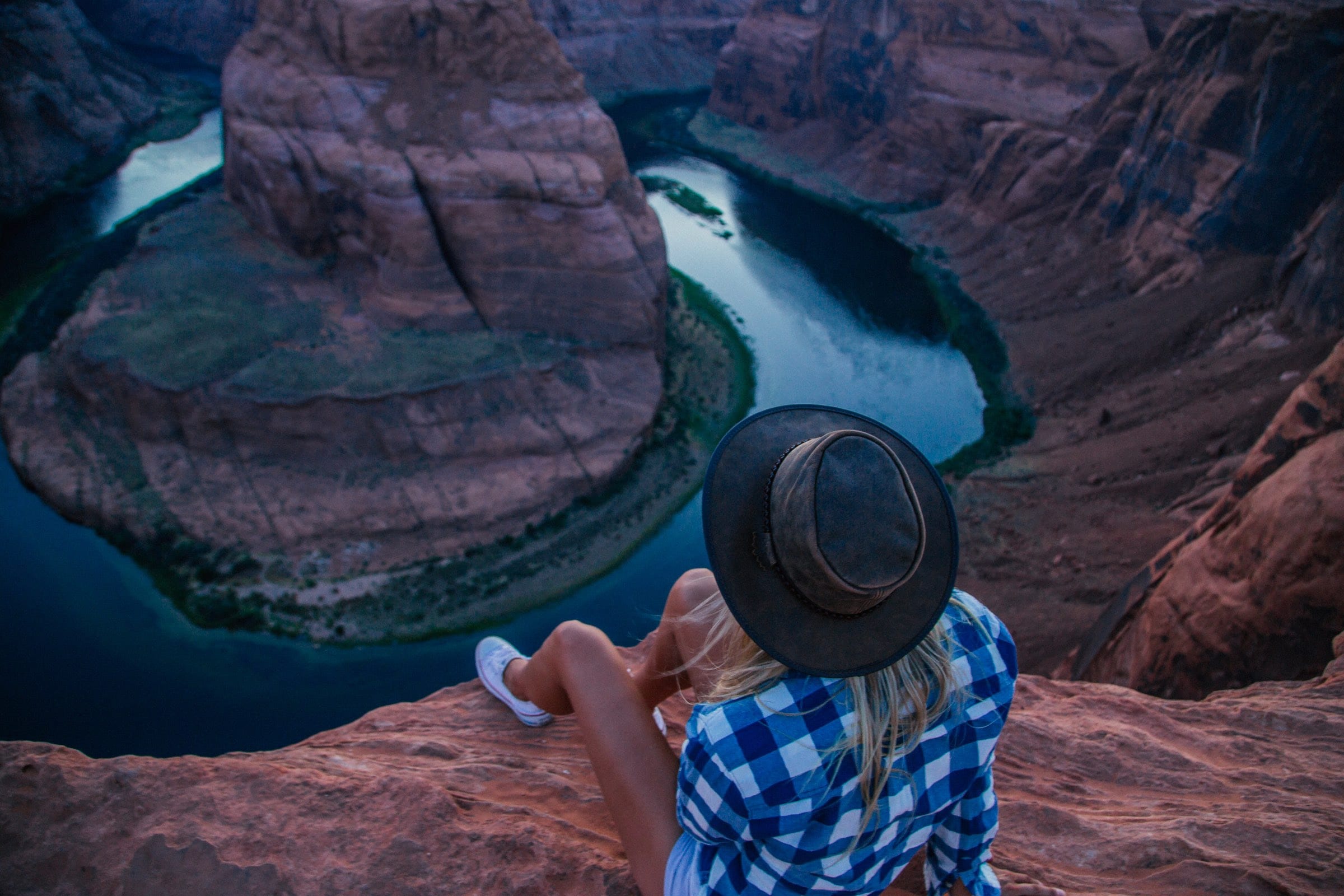 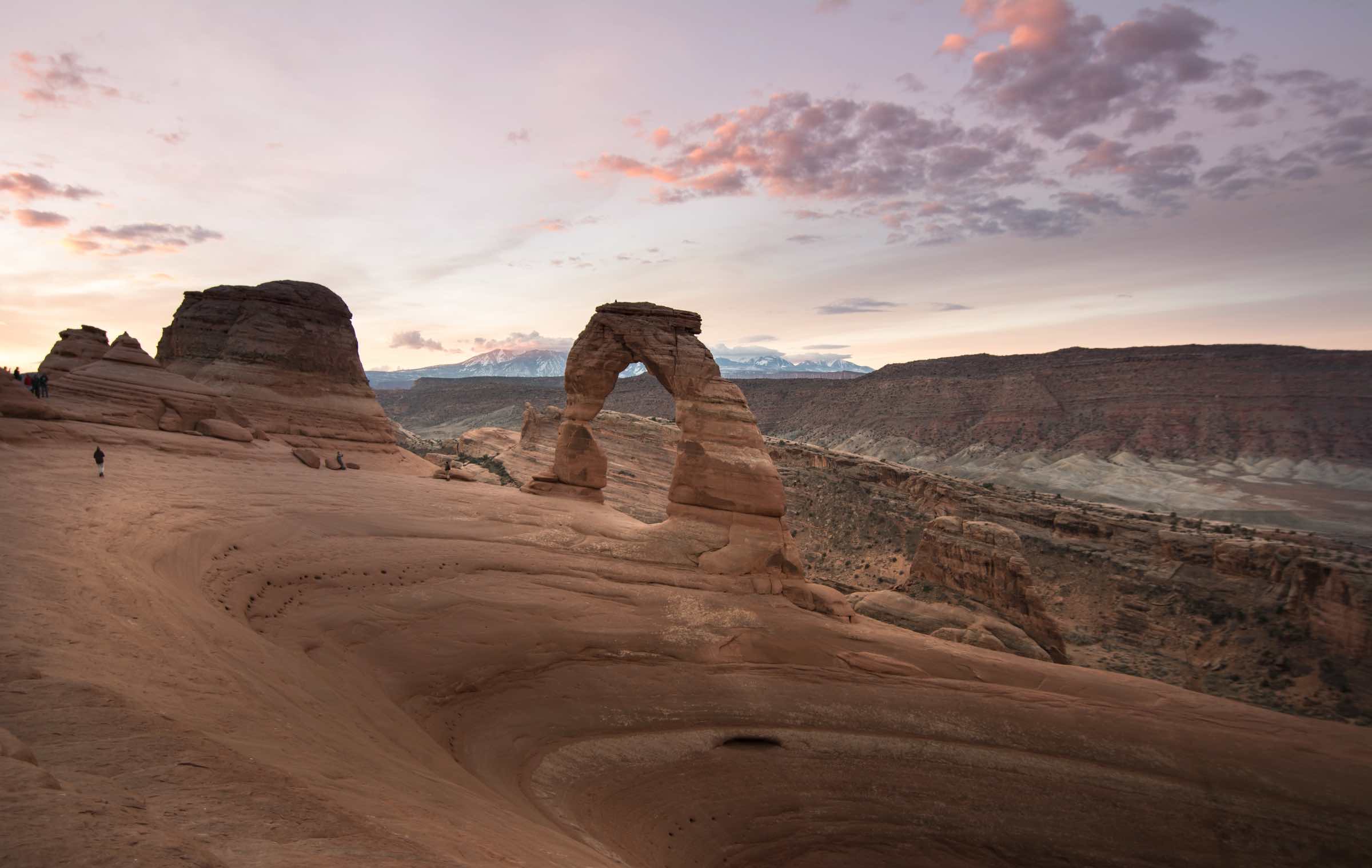 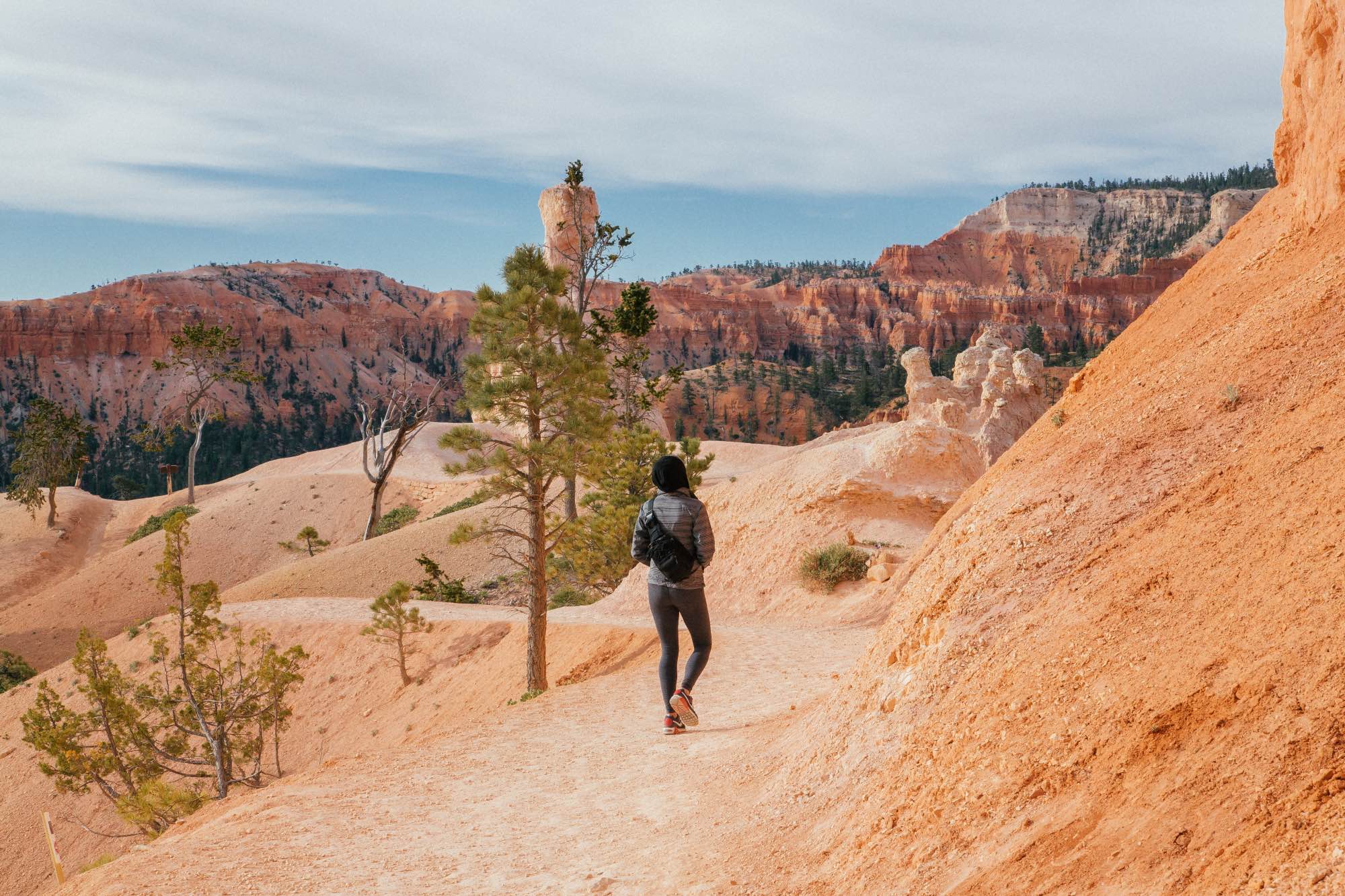 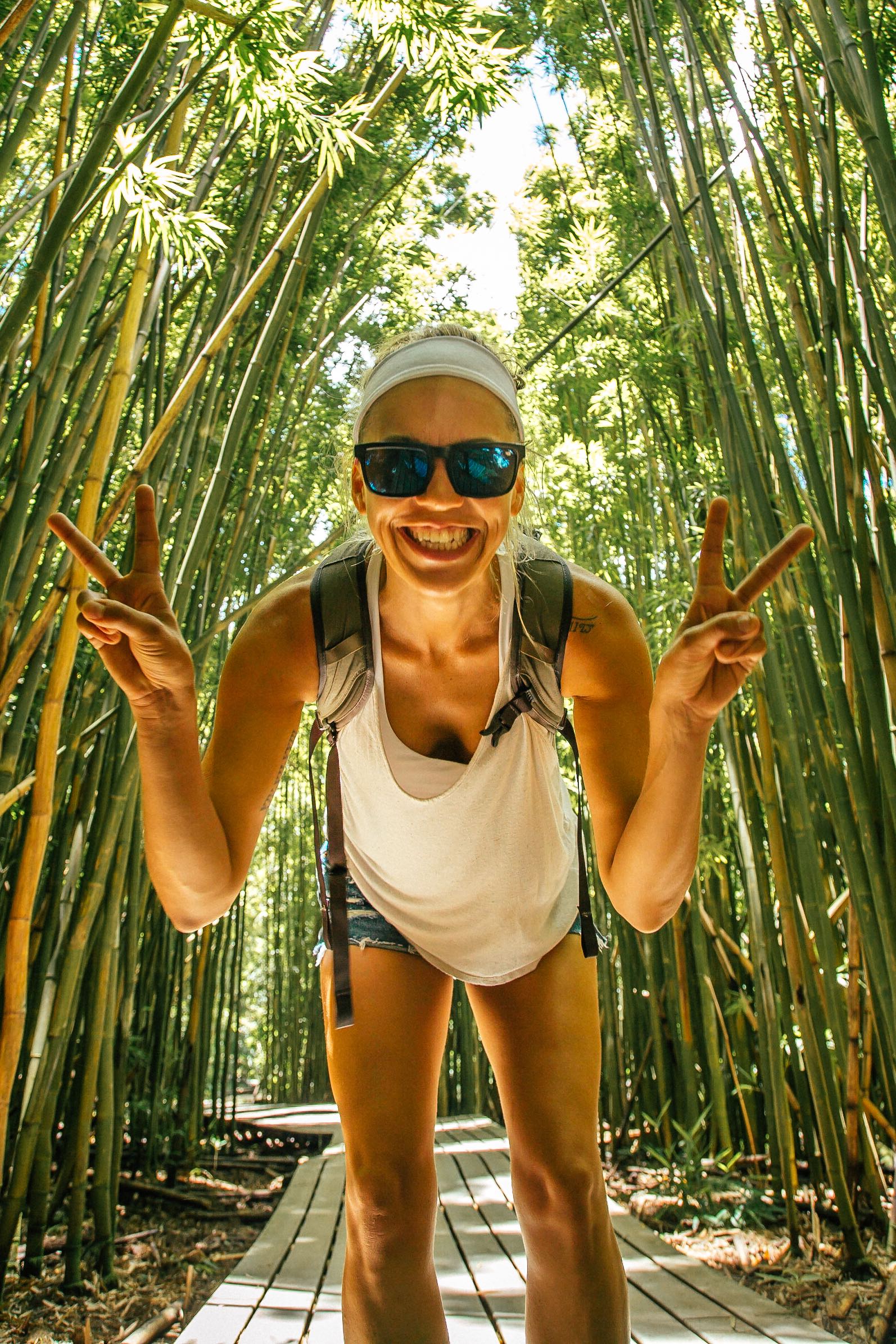 Hi I’m Jess! A thirty something, adventure seeking, gin loving, sun chasing, temple searching, bikini wearing outdoor enthusiast who is based on Maui and documenting life along the way.